Against the Primacy of Politics — Against the Overestimation of Majority Principle 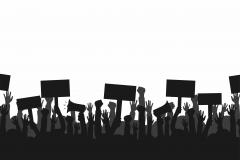 Much as one may admire the clear-sightedness of Greco-Roman political philosophy and especially Aristotle, one should not shy away from fundamental criticism. It has had a pervasive and toxic influence on the history of political thought.

Athens—on the Back of an Army of Slaves

For Aristotle, democracy was a decayed form of that “rule by the many” that he called a polity. So the career of the term “democracy,” which is generally regarded nowadays as positive, began with radical criticism. Aristotle accurately identified and described the potential of the principle of majority rule to degenerate. His Politics is a plea for a mixed constitution. He differentiates between rule by one, few or many. All three forms of government can be basically positive if they “rule with a view to the common profit” and fail if they serve only to benefit the one or the few or the many. Aristotle regards it as possible for the many to rule virtuously, but he considers it unlikely. His reasoning is entirely empirical:

For while it is possible for one or a few to be outstandingly virtuous, it is difficult for a larger number to be accomplished in every virtue, but it can be so in military virtue in particular. That is precisely why the class of defensive soldiers, the ones who possess the weapons, has the most authority in this constitution.

Although Aristotle showed himself to be a shrewd observer of his contemporaries when he defined man as a political animal (zoon politikon), in my opinion he prepared the way for a devastating overestimation of political, and a momentous underestimation of private, economic and civil society. For aristocrats like himself and Plato before him, and for many leisured aesthetes who came after him, homo oeconomicus—the farmer, the tradesman, the service provider and the merchant—was nothing but a philistine. These people—on the back of an army of slaves and other disenfranchised persons—concerned themselves with such banal activities as making a living. In continental Europe, this kind of division of labor between economics and politics has led to a widespread contempt for homo oeconomicus and for the economy as such, in both the broad and narrow sense of the word. The intellectual preference for homo politicus over homo oeconomicus is alive and well. The “primacy of politics,” as a fundamental principle of a grey-haired generation of believers in codetermination and grassroots democracy, still haunts the literature of social sciences.

Appenzell as the Counterpart of Ancient Athens

Direct democracy as embodied in the Appenzell “Landsgemeinde” differs markedly from the democracy of the Athenians.2 In Athens, the popular assemblies were convened three or four times a month and those who attended received a per diem payment. The assembly of the people controlled the civil service, supervised the state-regulated distribution of grain, decided whether to go to war or make peace, passed verdicts in cases of treason, ostracized citizens considered a danger to the state, listened to petitions, and selected the key functionaries for military matters, for whom war then became crucial to their survival. The Council of 500 met practically every day! The Convention, which was established during the French Revolution and became the model for many contemporary parliamentary systems, took many of its ideas from this system. In this way, politics itself becomes the disease that it is supposed to cure.

A marked contrast is provided by the political system of the two Appenzells, which have managed to compete peacefully for centuries with politically comparable but religiously and culturally differing ways of governing and living. This political system, which was practiced consistently for more than five hundred years, was in fact direct democracy. This refutes all assertions, including those of Aristotle, that rule by the many must collapse eventually under the weight of its internal deficiencies because it would inevitably lead to exploitation of the minority of rich citizens by the majority of the non-rich.

At the “Landsgemeinde,” a kind of open-air general assembly, elections were held and laws passed—or thrown out if there was no consensus. The chief magistrate, who was mandated by the people to act in a part-time capacity as head of the government, was entrusted for one year with the state seal with which contracts were officially sealed and was required to render public account to the effect that any action taken had been “for the good of the country.”

All posts in government and the judiciary were—and in some cases still are—part-time, unsalaried, and restricted to one year. There is no such thing as a professional politician; politics is merely a part of the function of each citizen. Those in positions of responsibility were elected and dismissed directly by the people. Their powers were always severely restricted. These involved, in particular, foreign policy, the legal system, and cantonal road construction. There was almost nothing to distribute apart from burdens. The decision to embark on a military campaign was taken by those who then made up the army. This co-identity of those taking the decision with those who had to implement it is crucial, especially in the area of military service where the collective demands that the individual put his life in jeopardy. In this case, Aristotle got it right. Where it is a matter of choosing war or peace—a fundamental political question—the many, who bear the consequences of the decision, are in fact more competent to decide than the few who may benefit from it.

This is the essential difference between the slave-owners and politicking idlers of Athens and the hard-working small farmers of Appenzell, who not only labored on their own land but also formed the militia that protected it. The importance of public and private issues—res publica and res privata—was fundamentally different. Generally the minimum consensus was found at the “Landsgemeinde” through the procedures of direct democracy, often with very substantial majorities. Sometimes the assemblies would end in dispute, but although all those present were armed, the disputes did not lead to bloodshed. For one day in the year, each man was a zoon politikon. The other 364 days belonged to the “Häämetli” (i.e., the home farm), its private economy, the community of one’s family, and the locally anchored culture. In summary, therefore, the process of building consensus within a democracy on the basis of the principle of majority rule is possible if it is limited in terms of scope, timeframe, and finance to the smallest possible portion of the life of a civil society, and if co-determination remains the exception to the rule of self-determination.

The practice of direct democracy in the two Appenzells has been presented here in a simplified and—admittedly—idealized way. It is regrettable that the open assembly, which had been an institution in Canton Appenzell Ausserrhoden, an industrialized area since the 19th century, was discontinued about ten years ago. However, it proved possible to retain the militia principle and the relatively lean political apparatus.

Without the instinctual distrust of all kinds of power, the principle of majority rule is in danger of doing away with that creative dissidence on which majorities too have to rely over the longer term. In the final analysis, protection for minorities protects the majority from collective stupefaction, but a great deal of nonsense is also propagated on the back of protection for minorities. It is often used to introduce group privileges of all kinds. We must not lose sight of the fact that, as Ayn Rand observed, the most important minority is the individual.

One should not make it too easy for them to provide this proof before the intellectual forum that assesses political power in theory at first and then also in practice. Despite Alcuin’s and Lichtenberg’s formulation (vox populi vox Dei), and consonant with Hans Hoppe, the principle of majority rule is “a god that is none.”3

The compulsion to do good and, above all, the compulsion to do what the majority holds to be good, turns diversity into uniformity and has a destructive impact on the community overall. Every creative community is based on peaceful competition, and if the principle of majority rule is misused to get rid of unpopular alternative solutions, it degenerates into rule by those populists who happen to have the ear of the majority at the time.

Originally presented as an address given on 28 June 2008 in Freiburg (Breisgau, Germany) on the occasion of receiving the Hayek Medal from the Friedrich A. von Hayek Gesellschaft.

Published in Property, Freedom, and Society: Essays in Honor of Hans-Hermann Hoppe