Protection of Overlapping Minorities and Majorities by the «Competition of Systems»

Switzerland’s federal system cannot simply be grafted «as is» onto South Africa’s stock, yet it tellingly illustrates that various competing smaller political units, with overlapping majorities and minorities, can still retain their unique character and autonomy (in a kind of «coopetition»), and in the process, individual groups need not necessarily be singled out for either privileged treatment or for discrimination.

In terms of language, religion, geographic size, economic power and the degree of urbanisation and industrialisation, the diversity among Switzerland’s cantons was never completely conflict-free. However, over the course of our history, the federal structure of the state, with its sometimes irrational frontiers whose only bases are historical, has led to a form of peaceful competition between very different jurisdictions, the effect of which has been detrimental neither to the small cantons, nor the whoever was in the minority at the time, nor to the country as a whole. The diversity of the demographic groups whitin South Africa ranges over an even wider spectrum. Diversity is an asset, and not a liability, if the «other» ist accepted and judged positive in his «otherness» by the majority, and if the claims for redistribution do not cripple the general economic growth. What is crucial is the peaceful agreement concerning borders, even if they cannot be satisfactorily drawn from every single point of view.

It is often alleged that centralist structures are more effective in protecting minorities’ interests through their power of intervention and financial support. The experience of Switzerland shows that minorities have better chances when living in smaller, competing political systems with overlapping minorities and majorities. Centralist governments of all levels have a tendency to define everything from above, including the minority’s indentity, and to draw up borders, trying to «clean up» the regions and to make them homogenous by «ethnic purification». The central government may be ready to pay subsidies, but these subsidies make the minorities more dependent on the supporting authorities, thereby reducing their chances of deciding their own future. Competition of overlapping heterogenous entities may not be the «first best solution» under all circumstances but in the middle and long term it runs in favor of the minorities.

«Irrational borders» can be advantageous.

Political borders have often assumed their shape following an act of war and as such they indicate the result of a power relationsh. The so-called «natural borders» have something arbitrary in them as well: nations have settled areas on both sides of a river or a mountain-pass in order to use it for mutually advantageous trade. Switzerland is a typical example of a country whose borders are partly political and partly natural. Over the years we have learned how to cope with «irrational borders», and even how to make good economic use of them.

At times of war it is potentially dangerous to have ethnic groups inhabiting both sides of a disputed border. The option oftreason is always open andfeared by both sides.

Parts of the population inhabiting a region spanning a border are under considerable pressure in times of war. If the war is between the two respective states, the ethnic groups have to face an insurmountable dilemma: should they stay loyal to their culture and language or to their fatherland? If they choose to be loyal to their cultural environment, they commit treason towards the rest of their state’s citizenry. If they stay loyal to their state, they betray their fellows in their cultural group. In both cases they will become disliked and possibly discriminated against by one or the other. Possibly this will lead to attempts at assimilation by force and consequent wiping out of the group’s identity. Such is the experience of minorities over the last 200 years which have been marked by fierce nationalism and nationalistic wars.

Despite the growing continental and global economic networks, the time of nationalistic wars is not over yet. However, these are now relicts of a type of politics which overreached itself. There is hope that at least in Europe, there will be no more nationalistic wars and that in the next century, we will see an era of intensive exchange of goods and services.

At times ofpeace these cultural groups inhabiting both sides of the border offer a route towards good trade relations. In this way they can contribute greatly to increasing efficiency. Ifthey remain disliked, it is not because offear; rather, it is because ofenvy at their better possibilities of communication.

The «minority question» can start from a better point in times of peace.

A state can benefit greatly from having minorities of the same language and mentality as neighbouring states and main trading partners. No energy needs to be wasted on protecting the minorities from petty fears about their being traitors. Energy may be directed towards allowing them to become more economically productive. In this way the whole state can benefit from their minorities which cease to be sources of danger and start functioning as sources of opportunity.

These days the minorities question often still remains often locked within the sphere ofnationalistic wars. It is time to unlock it and make it useful in the economic sphere.

Minorities still have to defend themselves against assimilation pressures.

The protection of minorities is seen by the majority population as a necessary cost, which has to be met because of considerations of international law. The obsession with the cost-side is great and as yet nobody has fully realised the possibility of turning the «minority question» from risk-minimisation to opportunitymaximisation. The more one substitutes economic calculation for national-political considerations, the better for the minorities. I can refer here to the experience of Switzerland with its canton Tessin inhabited by an Italian-speaking minority which in the context of the whole confederation does not even reach 10 percent of the population. In the last century, the Tessin was one of the poorest cantons. Thanks to strong economic links with northern Italy and an influx of German immigrants it could develop into an economically very important canton whose net contribution to confederal well-being is definitively positive. 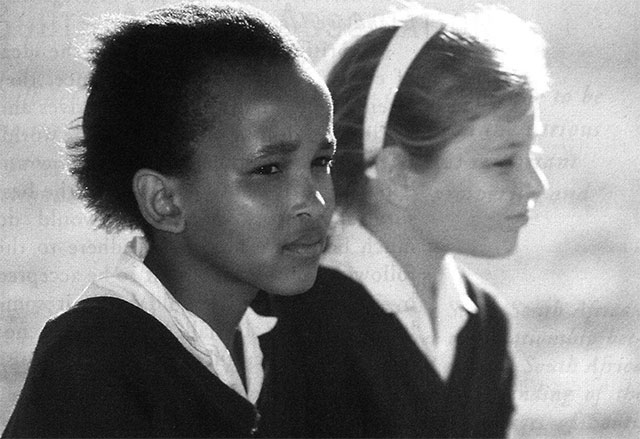 Diversity is a phenomenon which brings out creativity and flexibility in people.

Be this as it may, it remains questionable whether and how the complex web of costs and benefits of a minority could be precisely measured.

In an open society, diversity is an opportunity and not a handicap.

It is somewhat more difficult to document an economically beneficial role for those minorities which do not live along a border and/or which do not constitute the majority population in any country in the world.

Within the Swiss context, one could bring in the case of the rhaetoromanche peoples. In my opinion it cannot be said that their protection on the confederal level is a luxury. Diversity is a phenomenon which brings out creativity and flexibility in people. He who knows two languages and mentalities can also learn a third one with greater ease. Rhaetoromanche Switzerland has therefore not degenerated into any kind of a ghetto. Many great open-minded personalities come from this region. They have a natural flair for globalisation and prosperous branches of the economy such as tourism and sport.

Minorities should not fear heterogeneity and overlapping identities.

Minorities often fall victim to the ideal of ethnic purity. As a consequence, they often adopt this principle themselves and use it when dealing with the outside world. Even if one can subjectively somehow understand it, it hardly constitutes the best survival strategy. Minorities would do much better to adopt and adhere to the following motto: «If I want to be accepted by the majority, I should bring it some benefits. Then I shall be respected not because of my cultural status but because of the benefits I can offer.»

An all-too-strong protection of minorities «from above» can stifle the growth of a minority-friendly environment.

The best way of dealing with the minority question lies in the principle «I am accepting you because you bring me a net benefit even though you are different.» However, a principle like this one cannot be put into practice through compulsion or subsidies. On the contrary, these measures may be counterproductive by sharpening the existing tension and the propensity to aggression.

The assistance of the central authorities can lead not only to anger amongst the majority (envy), but also to the loss ofthe self-subsistence capability of the minority. Ifone walks on crutches for too long, one eventually forgets how to walk without them. Minorities should not be dis- SÜDAFRIKA UND DIE SCHWEIZ criminated against or persecuted. By the same measure, however, in the name of their chances ofsurvival, one should not ascribe them the label ofbeing in need of social assistance.

If this kind of «enlightened self-inter¬ ested» kind of minority protection does not rest on artificial support «from above», there has to be a mechanism of making visible the beneficial contributions ofthe minorities. Atfirst it may appear naive to purport that such a mechanism may arise spontaneously on its own.

The mechanism most suited to fulfilling the role ofmaking visible the advantages of diversity and heterogeneity is the mechanism of competition; of peaceful competition of systems and of countries.

At first it may appear that homogeneity, ethnic purity and centralisation are economically more successful. This assertion, however, cannot in the vast majority of cases stand up to the test of history. It is especially now in the modern age of globalisation that the benefits of diversity, ethnic impurity, overlapping systems and non-centrality will demonstrate themselves most clearly. The heterogeneous will be able to make good use of their faster progress. States which will have had such an experience should share it with others. At the same time, in the name of continuing diversity, they should not aspire to serve always and everywhere as an example.